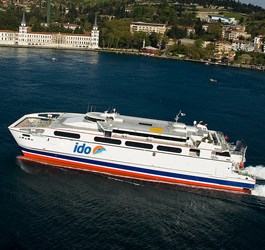 IDO, which has been purchased from the Istanbul Municipality, operates 52 vessels in the Sea of Marmara and carries more than 50 million passengers a year. The business had sales in 2010 of $231 million.

The Souter investor group holds a 30% stake in the acquired business with Sir Brian being the largest single investor who said today: “We are delighted to have successfully completed the deal and we look forward to making substantial improvements in IDO’s operations to provide passengers with an even better service.”

More frequent services on key routes and better integration with land transport services are among the developments planned.

Sir Brian continued: “Together with the local management team I am confident we will take IDO to new heights of success by improving everything from fast ferry frequency to catering. Our goal is to ensure motorists opt for seabus and ferry transportation rather than making long and frustrating road journeys in and around the congested Istanbul road network.”

Sir Brian also spoke of his satisfaction that a number of Scots had participated in the investment. He said: “I was pleased to open up this investment opportunity to a few close associates and I am delighted to have them as partners.”

Sir Angus Grossart said: “Brian Souter has a track record second to none when it comes to investing in the transport sector so we were delighted to join him in a material way in the takeover of IDO.”

Explaining why Souter Investments had decided to bid for the IDO business, Andy Macfie said: “With a population of more than 13 million, Istanbul is the main driver behind Turkey’s fast improving, high growth economy. The purchase of IDO gives us the opportunity to play our part in driving infrastructure improvements in the region.”

The Souter consortium beat off fierce competition to secure the business when it was put up for auction by the Istanbul Municipality. Rival bidders included Stena, the international ferry operator and Koç Holding, Turkey’s largest conglomerate.

Issued by Beattie Communications on behalf of Souter Investment.